Cameron Frye is the deuteragonist of Ferris Bueller's Day Off. He is the best friend of Ferris Bueller and Sloane Peterson. It is told that Cameron has a hatred for his parents. His mom and dad are always fighting, causing him to be emotionally disturbed. At the end of the film, Cameron destroys his father's car and gains back his confidence. He is played by Alan Ruck.

Cameron is first mentioned by the Economics Teacher during roll call. In the next shot, he is seen sick in bed. Ferris calls him and tells him to come over and take the day off with him. At first, Cameron refuses to take the offer, but he eventually came over.

Once he arrived, Ferris told him to call Mr. Rooney and disguise his voice as Sloane Peterson's father to check her out from school using the "dead grandmother" excuse. As Mr. Rooney is falling for it, Cameron messes up by first telling him to have Sloane out by herself, and then tells him to be out there with her. In order to avoid raising Mr. Rooney's suspicions, Ferris decides to borrow Cameron's dad's car, the 1961 Ferrari 250 GT California. However, Cameron doesn't want to do this and tells Ferris that "his dad loves [his] car more than life itself", giving hints about how psychotic his dad is. For a few times at first, Cameron tells Ferris not to take the car out and try something else, but he goes with it anyway.

Later, they are at the school waiting for Sloane to come with Ferris disguised as Sloane’s dad and Cameron hidden under the seat. When Ferris drives off, Cameron gets out and sits on the top cushion the entire time they drive.

When they get to Chicago, Ferris asks the Garage Attendant to look after the car, but Cameron is worried about what'll happen to it, but the attendant says, "Don't worry!" and drives off. He walks off with Ferris and Sloane not knowing that the car is being driven everywhere. 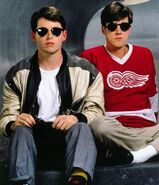 Add a photo to this gallery
Retrieved from "https://ferrisbueller.fandom.com/wiki/Cameron_Frye?oldid=4671"
Community content is available under CC-BY-SA unless otherwise noted.